I just finished reading Bill Johnson’s book “When Heaven Invades Earth” and, well, quite frankly, I have mixed feelings about the book. But before we go there, let us take a quick look at Johnson’s background.

Bill Johnson grew up in the Assemblies of God church as the son of a 4th generation pastor (making him a 5th gen pastor). In 1996, Bill became the senior pastor of Bethel Church in Redding, California (a church started by his father in 1968). This church has about 3,000 members and is home to the Bethel School of Supernatural Ministry, which has about 1,500 students. In 2006, the members of Bethel voted to withdraw their membership in the AG – allowing them greater freedom to network with churches outside the AG.

Knowing Johnson’s background, you can really see a lot of AG theology within the book. You can also see elements of the Word of Faith movement that arose out of Kenneth Hagin’s ministry in Tulsa, Oklahoma. Swirling around in between those two streams of theology are various concepts from John Wimber and the Toronto Blessing.

Got that? Ok. Now we can move into the book. END_OF_DOCUMENT_TOKEN_TO_BE_REPLACED

The first thing that came to my mind as I wrote this post was “old school.” My second thought was to laugh out loud at the thought of calling a 1987 conference “old school.”

Yet that is precisely what it is.

The conference I am referring to is John Wimber and John White’s “Come Holy Spirit” conference given on May 7-9, 1987. See, old school. =)

Actually, it’s not the date that makes this conference “old school” – it was the material taught.

The fist half of the conference (i.e. the first 4 cassette tapes) was hosted by Dr. John White. He walked the participants through a Biblical understanding of the Holy Spirit using a ton of scriptures. While the information was good, Dr. White’s teaching style was a tad…hmm….slow and drawn out…

Wimber’s half, however, was the antithesis of Dr. White’s part. This half (also 4 cassette tapes) dealt with the practical nature of the gifts of the Spirit. Wimber told the story of what happened when the Holy Spirit broken into his life and church followed by examples from church history.

It was awesome information; well worth the listening.[@more@]

The reason I called it “old school” was that as I was listening to the conference I was struck at how far the Church has come. Back in 1987 when White and Wimber were teaching these conferences, all of this was “new”.

Granted, classic Pentecostalism had been around for about 80 or so years at that point. But as far as the main body of believers having an understanding of the Holy Spirit and His outpouring – that was unheard of!

One of the benefits of the “Third Wave” of the Spirit was a blend of classic Pentecostalism with Evangelicalism. It was this “blend” that gave rise to several new movements, including the Vineyard, as well as revitalizing some old traditions.

Now days a lot of the information taught at this “Come Holy Spirit” conference is “old news”. i.e. It is taken for granted.

I guess that is what struck me the most in listening to these tapes: Don’t forget what you have been taught; hang on to them and teach them to the next generation. I just finished listening to a sermon by Steve Nicholson given in 2007 at The Cause Conference hosted by the Duluth Vineyard (most of you probably could care less where the sermon was given, but I figured I better reference these things… especially since I like knowing those details when I read a post).

Anyway… Nicholson (who is a Vineyard pastor and church planter) tells a story of when he was invited to join the Vineyard National Board with John Wimber in the 1980’s. After his first board meeting, he left in a state of confusion and dismay – all those folks whom he had seen on stage preaching to hundreds and thousands of people, who where used by God in amazing way – well, they were backbiting each other and basically, acting like little kids. Some of them even had home churches that hated their guts!

After a while Steve went to Wimber and asked him how to keep from being depressed in the midst of all this. Wimber told him to focus on the good apples…

In a lot of ways Nicholson’s story mirrors my own story. When you first join a church, you sit back and watch the leaders with a sense of awe. You see God moving through the leaders and you’re like – “wow! What would it be to work with these guys?”[@more@]Then you move from the church pews to the office halls and everything changes. You find out that people are human and everyone has warts.

At this point, you some choices:

Focus on the good apples. Every church – shoot, every small group, movement, company, family or anywhere with two or more people – has good and bad apples. The trick is not agreeing with everything everyone says – it’s trusting God and allowing Him to keep you focused on what He is doing in the midst of our humanness.

Church is good. It is the bride of Christ. Let us jump in and get our hands dirty.

As some of you know, I have been involved in a personal in-depth study into of the Kingdom of God and what that really means. God has been radically changing the way I look at the Bible, life and this world. I’ve been given a new pair of glasses.

The deeper I get into the study of the Kingdom of God, the more the name of John Wimber keeps popping up. To be sure, I’ve heard of John Wimber before – after all he was the founder of the Vineyard Movement, which I’m a part of – but it was usually connected to a quote or phrase such as “the meats in the street” or “doin’ the stuff”.

I was browsing online this week trying to locate some additional material about the Kingdom of God from different sources. During this hunt, I discovered two sites that had personal testimonies about the writer’s first meeting with John Wimber. The fact that these testimonies were online wasn’t that odd as both sites where affiliated with the Vineyard in some way. The thing that struck me was WHAT Wimber was doing when they meet him.[@more@]

Let me show you.

The first article I found was on the South Africa Association of Vineyard Churches (AVC) website. It is an excerpt from the book, “Doing Church”, written by Alexander Venter (Area Pastoral Coordinator for the South Africa AVC). This is how he meets Wimber:

I will never forget the first meeting I was in with John Wimber. It was the first morning of the Pastor’s Conference in Johannesburg. When it was time to begin, John strolled up to the piano, sat down, and gently began to play and sing ‘J-e-es-u-s what a wonder you are, you are so gentle, so pure and so kind …’ Slowly we all joined in, but I quickly found myself overcome by the simplicity of the words, the warmth, gentleness and intimacy of the experience, and I began to feel all tender and tearful….Then John stood up and casually opened his Bible and began to talk to the pastors about the Kingdom of God. Again, there was no preacher’s tone or loud voice, no religious jargon or sermonising; just an honesty, openness and clarity that was completely disarming.

The second testimony is vaguely similar – just on a different continent.

This article was written by Don Williams who was a Presbyterian pastor at the time. He is now a member of the Vineyard movement as a theologian, author and former-pastor. He recalls his first introduction to Wimber as such:

As I entered the parking lot of Canyon High School for the evening service, people were literally running toward the gym. Clearly they weren’t drifting in for church as usual. Once inside, I was greeted by an auditorium filled with about 2,000 people, informally dressed. I slipped into the bleachers. A group of musicians mounted the platform at one end of the basketball court and began to play simple songs….After worship, the large man at the keyboards, who I identified as John Wimber, got his Bible and began to speak. From my days in the “Jesus Movement” of the ‘60’s, I expected a pop sermon from Revelation on the end of the world. I got a thoughtful sermon on the kingdom of God, come and coming and our place in it “between the times.”

Did you catch the similarities? There were two of them. The first was the simple worship that started each meeting. The second was that John Wimber talked to each group about the Kingdom of God. It is the second similarity that really hit me…

Pause there for a minute.

A few years ago I butchered a sermon in Chile (granted I had five minutes to prepare), afterwards my mentor told me to prepare my heart message so that I would and could be ready to preach at any time. Honestly – I had a tough time coming up with such a message – in fact, I couldn’t... I mean, most of my heart was caught up with the “missions bug” and the missional heart of God – yet somehow that didn’t seem right….

Enter the Kingdom of God.

This was THE central message of Jesus Christ as well as John the Baptist, the Apostles, Isaiah, Moses, Paul and a pretty much everyone else (granted they all didn’t use those words). Now I find that it was also the central message of John Wimber – a man whom God used to change the course of the church. I say that not just because I’m a member of the Vineyard Movement – but because the influence of John Wimber transcended denominations.

What does this have to do with me? I’m not sure right now. But God is taking me on an incredible journey into His word. I’m just hanging on and yelling like a mad man on a roller coaster. 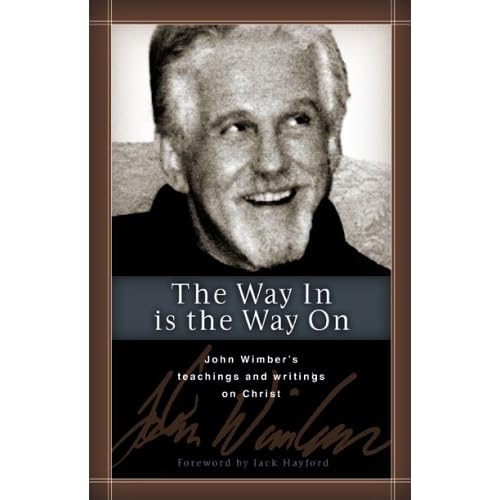 …dog tired and hands tied to the horn…but at least I’m in the saddle.

As I try to do two days worth of work in one day – all the while trying not to run my energy down – I’m going to leave you all with a quote from John Wimber’s book The Way In is the Way On:

Keep your focus on Jesus. Concentrate on the realization that God is on your side and He is good. God loves you, and you are precious to Him. Your efforts to please Him on the one hand don’t satisfy, but on the other hand, they always please. The Father won’t rest until you are just like His Son, but He enjoys every little effort you make to try and be like Him.

Keep it up, and remember: He is easy to please, but hard to satisfy. [@more@]